About us Why Vertex? Our Certifications Dealership Enquiry Careers Get in Touch

Automatic digital rebound hammer is an instrument used for non-damage testing and evaluation of compressive strength of hardened concrete in building structures. It can detect and record rebound value, carbonization depth value, Angle, test surface and other parameters.

As Per IS Standard

This Warranty covers the defects resulting from defective parts, materials or manufacturing, if such defects are revealed during the period of 12 months since the date of purchase.

All pictures shown are for illustration purpose only. actual product may vary due to product enhancement.
get a quote

Automatic digital rebound hammer is an instrument used for non-damage testing and evaluation of compressive strength of hardened concrete in building structures. It can detect and record rebound value, carbonization depth value, Angle, test surface and other parameters. The strength of the component can be inferred immediately after testing.

What is Rebound Hammer Test?

Rebound Hammer test is a Non-destructive testing method of concrete which provide a convenient and rapid indication of the compressive strength of the concrete. The rebound hammer is also called as Schmidt hammer that consist of a spring controlled mass that slides on a plunger within a tubular housing.

The operation of rebound hammer is shown in the fig.1. When the plunger of rebound hammer is pressed against the surface of concrete, a spring controlled mass with a constant energy is made to hit concrete surface to rebound back. The extent of rebound, which is a measure of surface hardness, is measured on a graduated scale. This measured value is designated as Rebound Number (rebound index). A concrete with low strength and low stiffness will absorb more energy to yield in a lower rebound value.

Fig.1.Operation of the rebound hammer

Rebound hammer test method can be used to differentiate the acceptable and questionable parts of the structure or to compare two different structures based on strength.

If the rebound hammer is held at intermediate angle, the rebound number will be different for the same concrete. 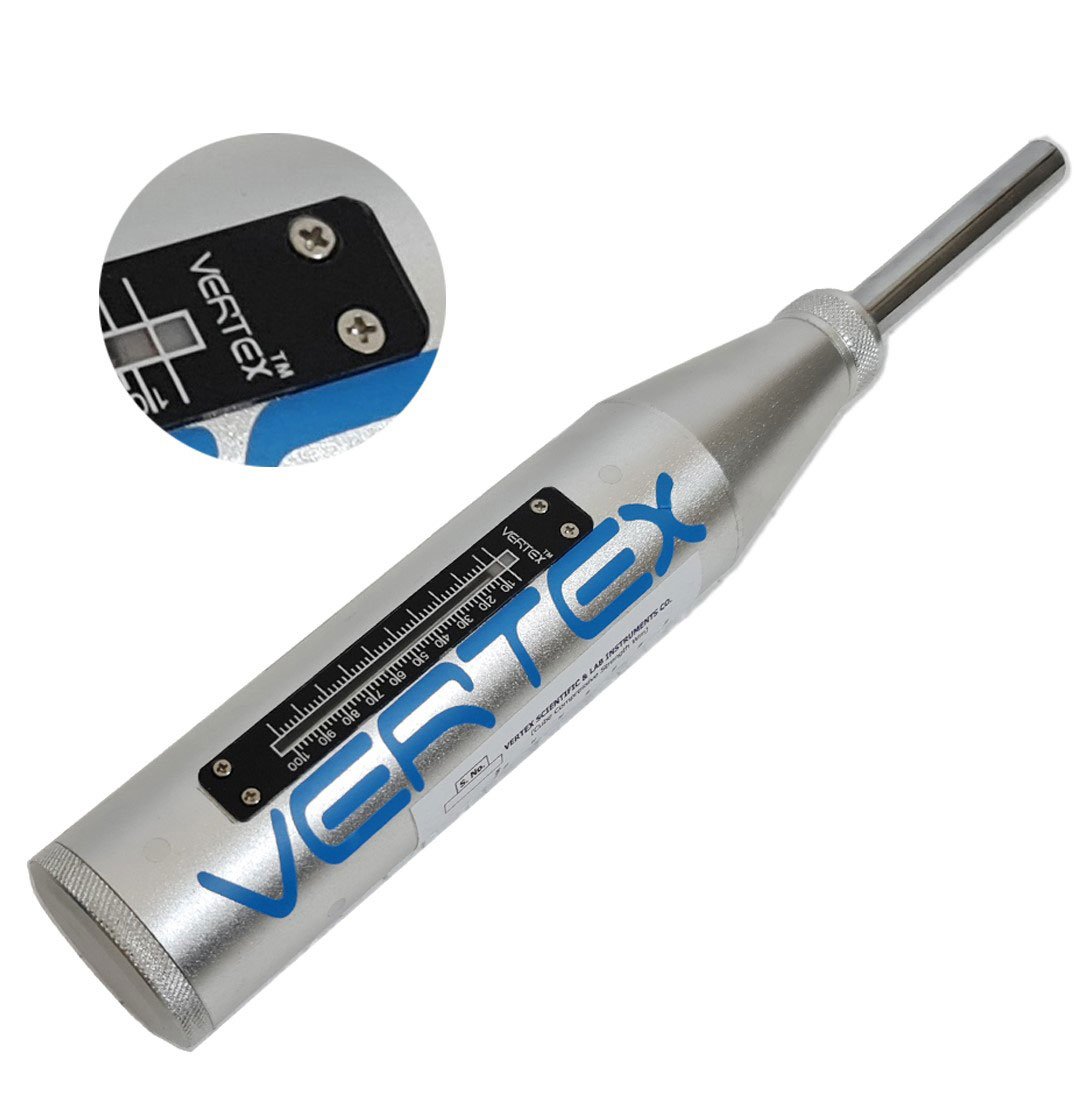 Correlation between compressive strength of concrete and rebound number

The most suitable method of obtaining the correlation between compressive strength of concrete and rebound number is to test the concrete cubes using compression testing machine as well as using rebound hammer simultaneously. First the rebound number of concrete cube is taken and then the compressive strength is tested on compression testing machine. The fixed load required is of the order of 7 N/ mm2 when the impact energy of the hammer is about 2.2 Nm.

A direct correlation between rebound numbers on wet cubes and the strength of wet cubes is not recommended. Only the vertical faces of the cubes as cast should be tested. At least nine readings should be taken on each of the two vertical faces accessible in the compression testing machine when using the rebound hammers. The points of impact on the specimen must not be nearer an edge than 20mm and should be not less than 20mm from each other. The same points must not be impacted more than once.

Fig.3.Relationship Between Cube Strength and the Rebound Number

Moreover the rebound index is indicative of compressive strength of concrete up to a limited depth from the surface. The internal cracks, flaws etc. or heterogeneity across the cross section will not be indicated by rebound numbers.

Table-2 below shows the quality of concrete for respective average rebound number.

Table.2. Quality of Concrete for different values of rebound number

As such the estimation of strength of concrete by rebound hammer method cannot be held to be very accurate and probable accuracy of prediction of concrete strength in a structure is ± 25 percent. If the relationship between rebound index and compressive strength can be found by tests on core samples obtained from the structure or standard specimens made with the same concrete materials and mix proportion, then the accuracy of results and confidence thereon gets greatly increased.

The advantages of Rebound hammer tests are:

The disadvantages of Rebound Hammer Test

Below mentioned are the important factors that influence rebound hammer test:

The correlation between compressive strength of  concrete and the rebound number will vary with the use of different aggregates. Normal correlations in the results are obtained by the use of normal aggregates like gravels and crushed aggregates. The use of lightweight aggregates in concrete will require special calibration to undergo the test.

Type of Surface and Moisture Condition

Wet concrete surface if tested will give a lower strength value. This underestimation of strength can go lower to 20% that of dry concrete.

Type of curing and age of concrete

As time passes, the relation between the strength and hardness of concrete will change. Curing conditions of concrete and their moisture exposure conditions also affects this relationship. For concrete with an age between 3days to 90 days is exempted from the effect of age. For greater aged concrete special calibrated curves is necessary.